As Head of Department and Head of Programme, I was leading the conceptualization and design of the NEW PGCE programme that will be submitted to the HEQC for scrutinizing. I provide a short summary of the conceptual framework of the newly conceptualised PGCE too.

By taking cognizance of the NMMU vision and mission, the Faculty of Education’s mission and vision, the NMMU graduate attributes as well as all the national imperatives (including the requirements of the HEQC and MRTEQ), the PGCE has been conceptualized to prepare students NOT only for the current requirements, but also to prepare them with dispositions to and resilience towards an unknown future. This conceptualization based on the different theoretical perspectives of Darling-Hammond & Bransford (2005), Darling-Hammond (2005, 2006, 2012), Hawkins (2002) and Vali (1993) as adapted and depicted in Figure 1. This process culminated in a conceptual framework for the new PGCE titled ‘Preparing Teachers for a Changing World’ (Darling-Hammond & Bransford, 2005, p. 12; Darling-Hammond, 2005, 2006, 2012; Hawkins, 2002; Vali, 1993) as presented in Figure 1 (Click here to enlarge Figure 1. Enlarge the PDF file display size.) 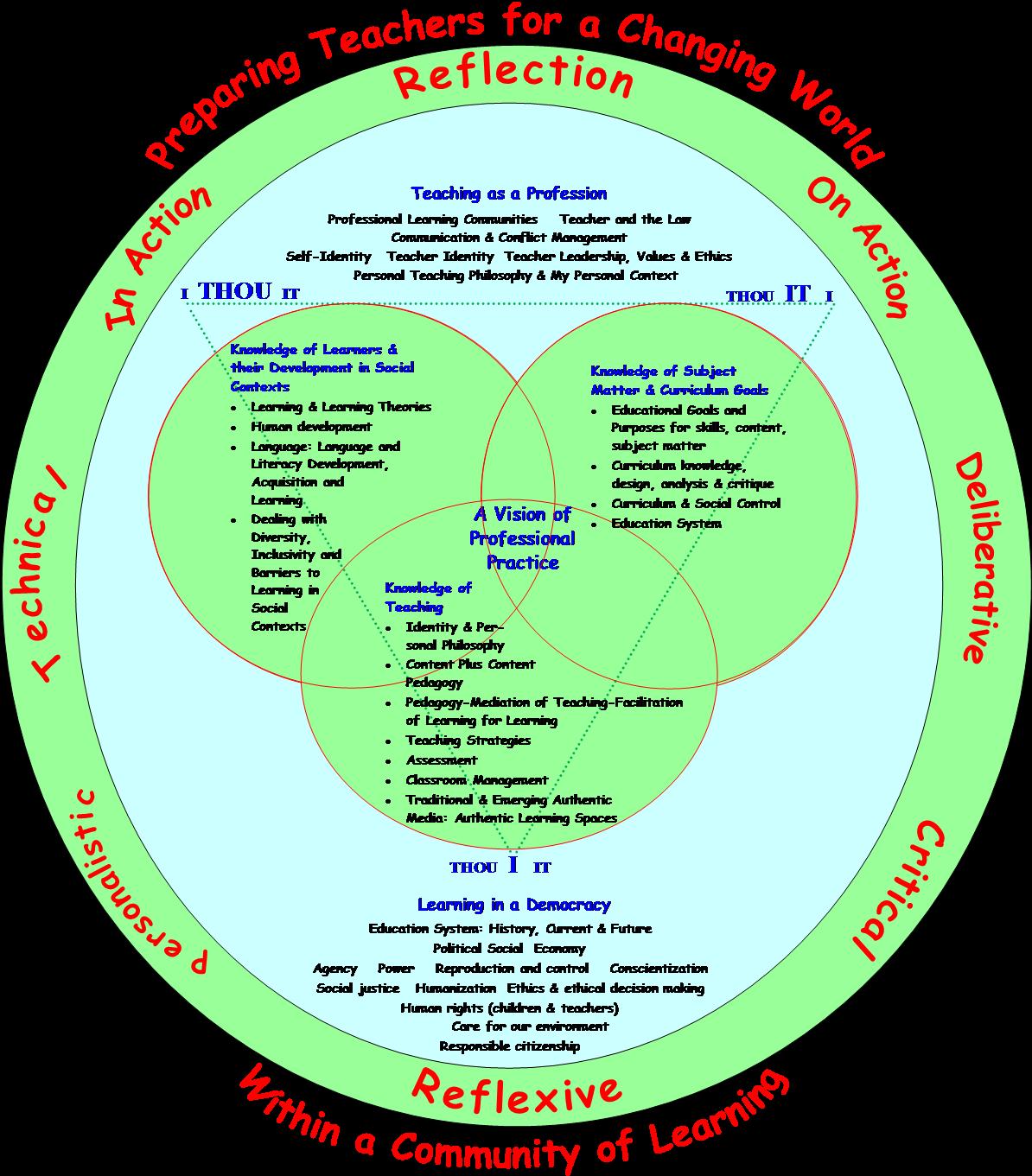 The PGCE Conceptual Framework depicted by Figure 1, suggests that in order to prepare teachers for a changing world, it is important to include aspects related to:

Pertinent aspects that have to be addressed and which are related to each of these aspects have been indicated below each of these headings in Figure 1.

In order to develop and enable the envisaged NMMU vision for professional teacher practice, it is vital to address three key knowledge aspects, each with sub-aspects, namely:

These above-mentioned three key knowledge aspects, also relate to the perspective of ‘I-Thou-It’ as posited by Hawkins (2002) in his publication, ‘The Informed Vision: Essays on Learning and Human Nature’. The I refer to the teacher, the Thou to the learner and the It to aspects outside the realm of the I and thou. However, it is important to note that the ‘I-Thou-It’ is not viewed as separate from one another, as they inform one another. For example, at certain points, the Thou might be the central focus, but this does not negate the influence, role or impact of the I and It at the same time.

In addition, Figure 1 also highlights that the PGCE student progresses and develops from starting as a ‘New Beginner’ to ‘Starting to Teach’ and being ‘Reflective and Reflexive’ in order to become a ‘Proficient and competent beginner teacher’. Personal self-reflection, being reflexive, acting professionally and the development of agency are regarded as key in assisting with the development of the future teacher. The reflective perspective is based on Vali (1993) which suggests a reflective practice framework based upon technical reflection, deliberative reflection, reflection in action, reflection on action, personalistic reflection and critical reflection.